Indio-Maíz Biological Reserve is considered one of the most important tropical rainforest of Central America. In 2005 it was declared as an important area worldwide.

Indio-Maíz Reserve is located between the towns El Castillo, San Juan de Nicaragua and Bluefields, in the southwest corner of Nicaragua.

A great percentage of the reserve is part of the ancestral territory of indigenous community, Rama, and afro-descendant, Kriol, who have formed the Territorial Government Rama — Kriol.

Both communities fight for the preservation of their culture, home, and forest, which is threatened by the invasion of farmers and the arrival of big industrial projects to their territory.

A forest in danger

The government negligence towards the protected areas of the country have caused serious damage in these territories where a part of it disappears everyday and this situation puts in danger its biodiversity and the natural resources.

Protection and preservation of the natural patrimony of Nicaragua should be a priority for the country, especially the government. However, reality is different and public institutions have become the promoters of destruction of Indio-Maíz Reserve.

Types of species of mammals, birds,
reptiles, insects, and amphibians.

Part of the ancestral
territory Rama-Kriol. 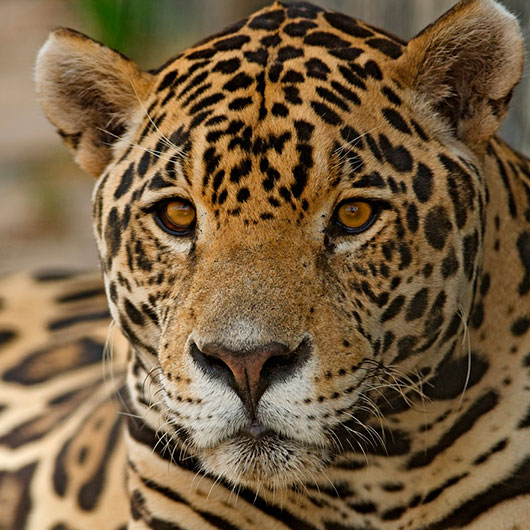 Indio-Maíz Reserve is the home of many majestic, impressive and beautiful animals. The variety of colours, shapes, sounds and sizes make the reserve a truly animal sanctuary that it’s worth to preserve, because most of these animals are threatened or endangered, like jaguar (Panthera onca), Baird’s tapir (Tapirus bairdii) or the scarlet macaw (Ara macao) and the great green macaw (Ara ambiguus). Get ready to know our most iconic species and discover their stories. 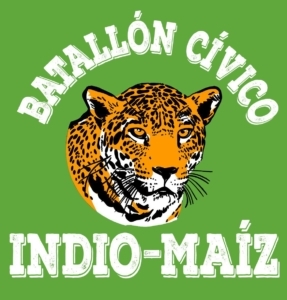 The Batallón Cívico Indio-Maíz is an environmental movement, independent and founded by citizens who are looking for the preservation of water and the forest in the southwest of Nicaragua, especially protecting Indio-Maíz Biological Reserve.

The Batallón Cívico Indio-Maíz has been created by citizens that are part of organizations within the Environmental Organizations Union from the Southwest of Nicaragua (UOA). In this movement people participate as individuals and they would like to get more local people involved to protect Indio-Maíz.

INDIO-MAÍZ BIOLOGICAL RESERVE HAS BEEN FORGOTTEN

September 13th 2018 La Prensa Even though the fire that lasted 10 days in Indio-Maíz Biological Reserve caught the attention of national and international media, the main issue that threatens the protected area is the invasion of illegal settlers… 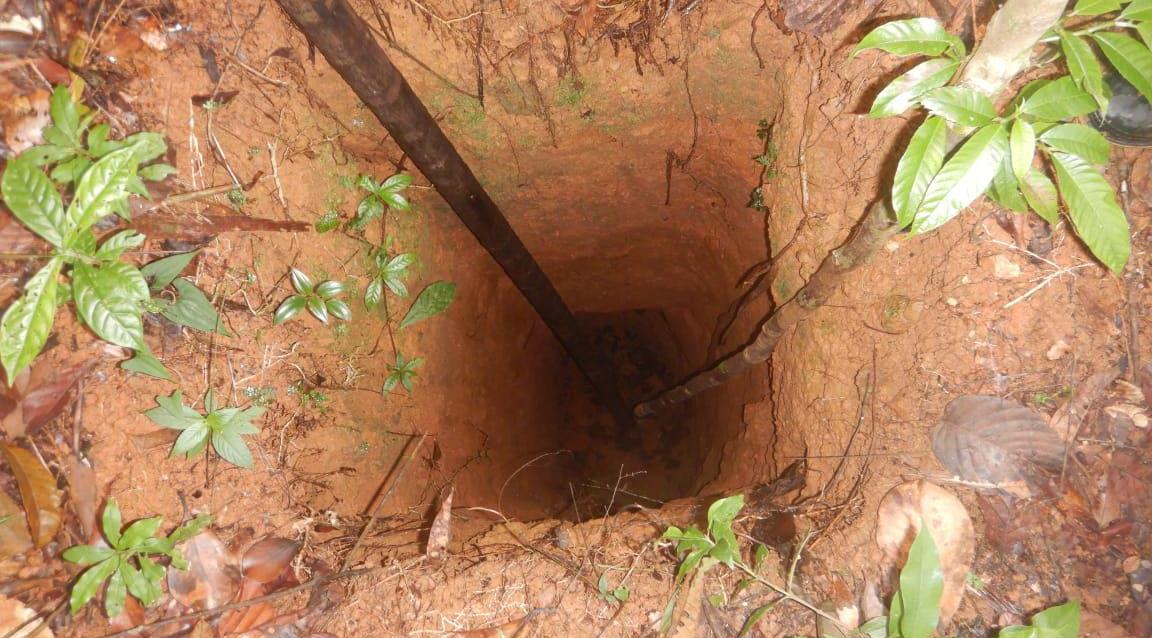 UNESCO COULD REMOVE THE CATEGORY OF ‘RESERVE’ TO INDIO-MAÍZ 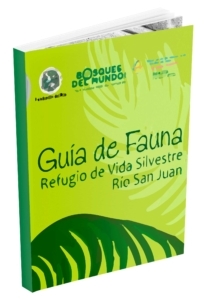 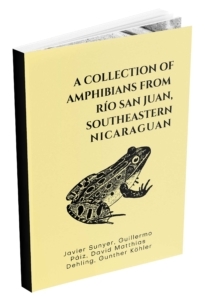 THE COLLECTION OF AMPHIBIANS FROM RÍO SAN JUAN 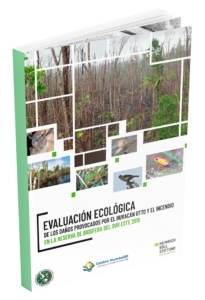 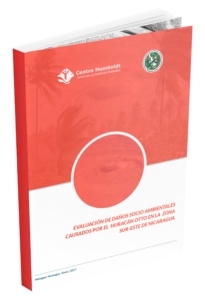 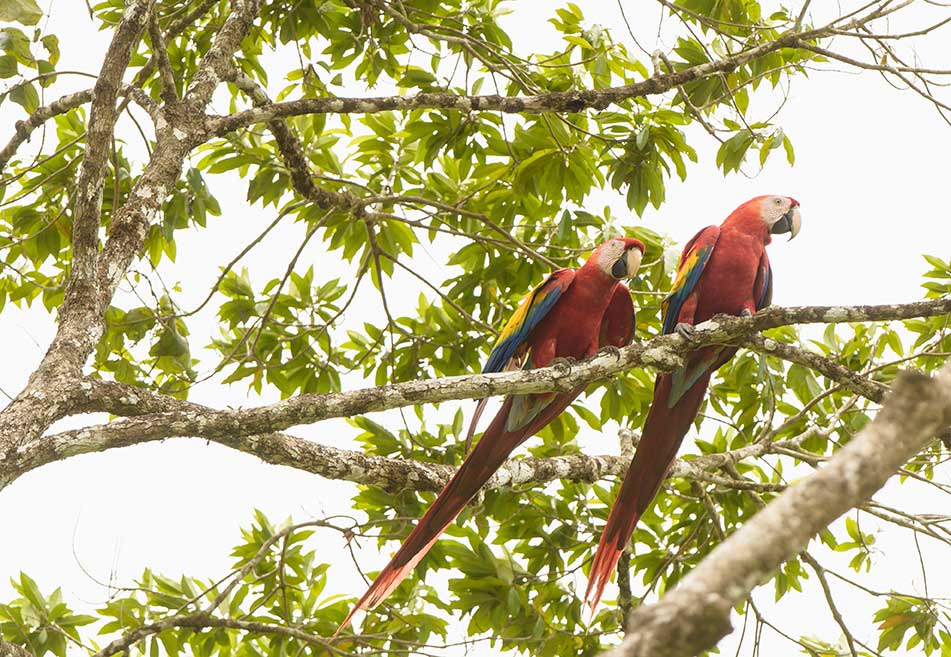 Natural history: They live in the canopy, on the edges of patches or deciduous or evergreen primary forests. They build their nest in large natural cavities in trees or in old woodpecker nests in soft wood, which they expand; it is located mainly at heights of 7 to 25 m.

They lay 1 or 2 eggs. They reproduce during the dry season. They form pairs or family groups of 3 to 4 individuals. Sometimes they unite in groups of up to 25 to 50 individuals in communal roosts, tall trees, or mangroves.

Some people appreciate it for its colorful plumage, which is why they are kept in captivity in cages, which is prohibited by law.

In Nicaragua they reproduce well in captivity, but require large cages, nesting boxes, isolation and extreme patience. Some places where they breed in captivity is the National Zoo.

• Status: Species in danger of extinction. Main threats for spider monkeys: deforestation, hunting, people take the babies to have them as pets.
• Closed period: Indefinite.

Natural history: It is an active species throughout the day and moves rapidly between branches with its arms and tail to aid movement. Its body is slim and the limbs long. It has two types of coloration: reddish-brown or dark gray.

They move in large groups, of 15 to 40 individuals, which are sometimes divided into smaller groups. Their diet is basically fruit, with some flowers and leaves. Females have a gestation period of 225 days and can take two to three years for them to become pregnant again.

They have a single young, and reproduce every two or four years, at birth the young weigh approximately 500 g. they maintain a close relationship with their mother for the first three months. When a mother gives birth, it carries the child on its belly and when it is two months old it rides it on the mothers back.

Lactation lasts 1 year, but during this period this reduces little by little, aiding their weaning, around three months they begin to eat solid food. The communication system is complex and consists of vocalizations, facial expressions, body positions, and chemical signals.

The signaling behavior by adult males consists of records of secretions from a pectoral gland on the branches or on the foliage. Theirhowls are used to warn of the presence of predators or a land invasion. 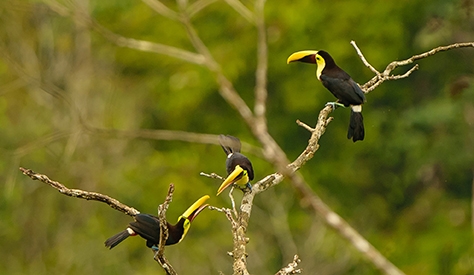 Natural history:  This species lives in the canopy and edges of forests, old secondary forests, and cocoa plantations. Sometimes they visit scattered trees in a pasture. They form scattered flocks of 6 or more individuals.

Its name is due to it having a flaming 16 cm long beak with the colors of the rainbow. They are black bodied; in the male, the beak is larger and its neck and chest are bright yellow. They feed on fruits, invertebrates, and small reptiles.

They measure between 18 and 63 cm long, their body and neck are short, their tail, depending on the species, measures from almost half to almost the entire body. The female Rainbow-billed Toucan usually lays two to four white eggs. The male and female share the care of the eggs, taking turns hatching them. The eggs hatch in approximately 15-20 days.

Afterwards, both the female and the male take turns feeding the chicks. At birth, the young are featherless and keep their eyes closed for about three weeks. They remain in the nest for eight to nine weeks while their beaks fully develop and prepare to fly. 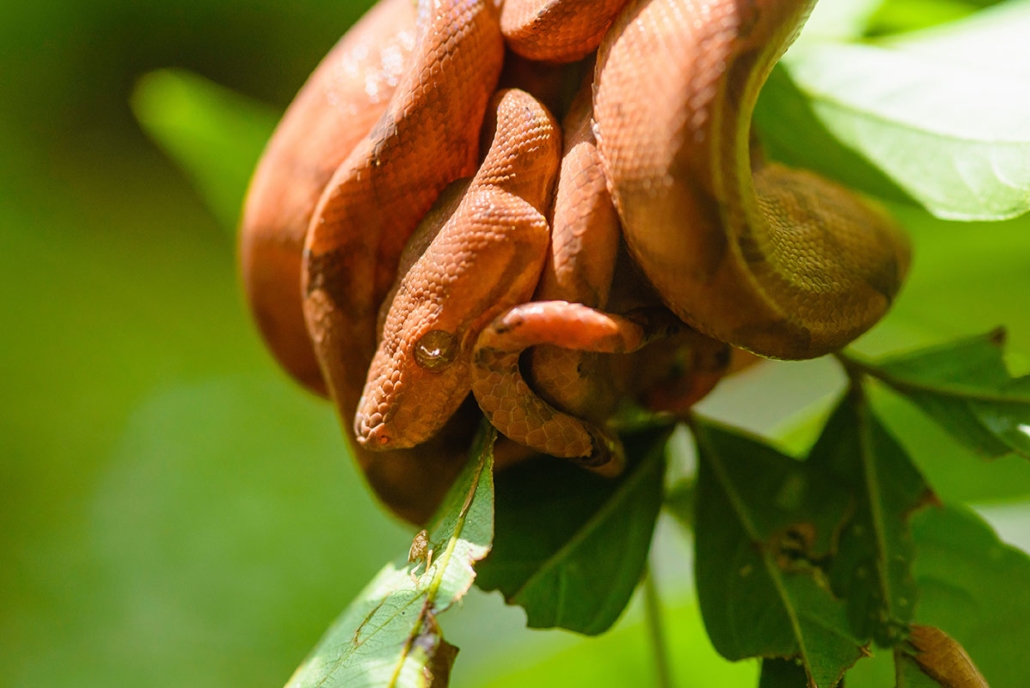 Natural history: It is a non-poisonous snake; it is both arboreal and terrestrial and has a wide range of habitats. It is a slow and deliberate snake in its movements. Their temperament is highly variable, there are individuals who are very difficult to induce to bite and others who attack indiscriminately, at any opportunity.

Tame and calm specimens can be a valuable tool to use in environmental education. Boas consume a wide variety of prey such as rats, mice, lizards, birds, and mammals, including monkeys. Because the bones of the pelvic girdle are externally visible, in certain rural areas it is associated with evil spirit forms.

Likewise, it is considered a snake capable of giving birth to poisonous snakes of all kinds; This is due to the polychromatism(many colors) characteristic of newborns and its resemblance to poisonous snakes such as pitvipers or Terciopelo, which is why it is indiscriminately killed. 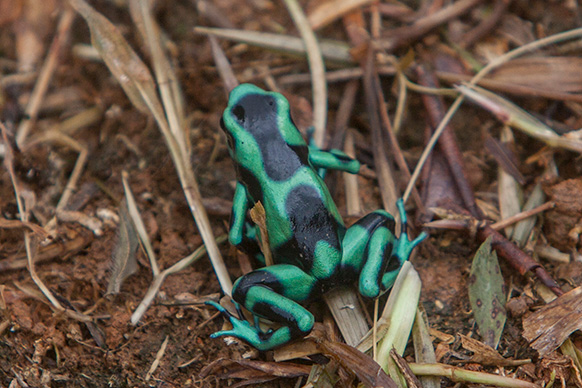 Natural history: It lives on the floor of humid forests and has also been found in epiphytic bromeliads at heights of 3 – 25 m off the ground. When the tadpoles are developed, they climb on the back of the male who takes them to aquatic habitats such as containers formed by fallen fruits and leaves, bromeliads and holes in the branches. It feeds on ants and other small insects.

This species has toxins similar to Oophaga pumilio that are a very powerful neurotoxic poison, causing muscle contraction, and other alkaloids that serve as a defense against predators. To complete their life cycle, these frogs are dependent on water.

The males have a complicated ritual to attract a mate, first they fight each other to establish territories for mating, later they attract a female with songs. Over the course of two weeks, the male visits the eggs from time to time to rotate them and remove any microorganisms that have settled in them. Males can mate with up to six females and care for all offspring simultaneously, thereby increasing the reproductive success of males.

The indigenous people of the Amazon used the poison of these frogs and spread the darts and arrows of these compounds to hunt animals. The effect of a poison dart is paralysis of the central nervous system and cardiac arrest. Due to their striking and beautiful colors, these living frogs are highly appreciated as pets. 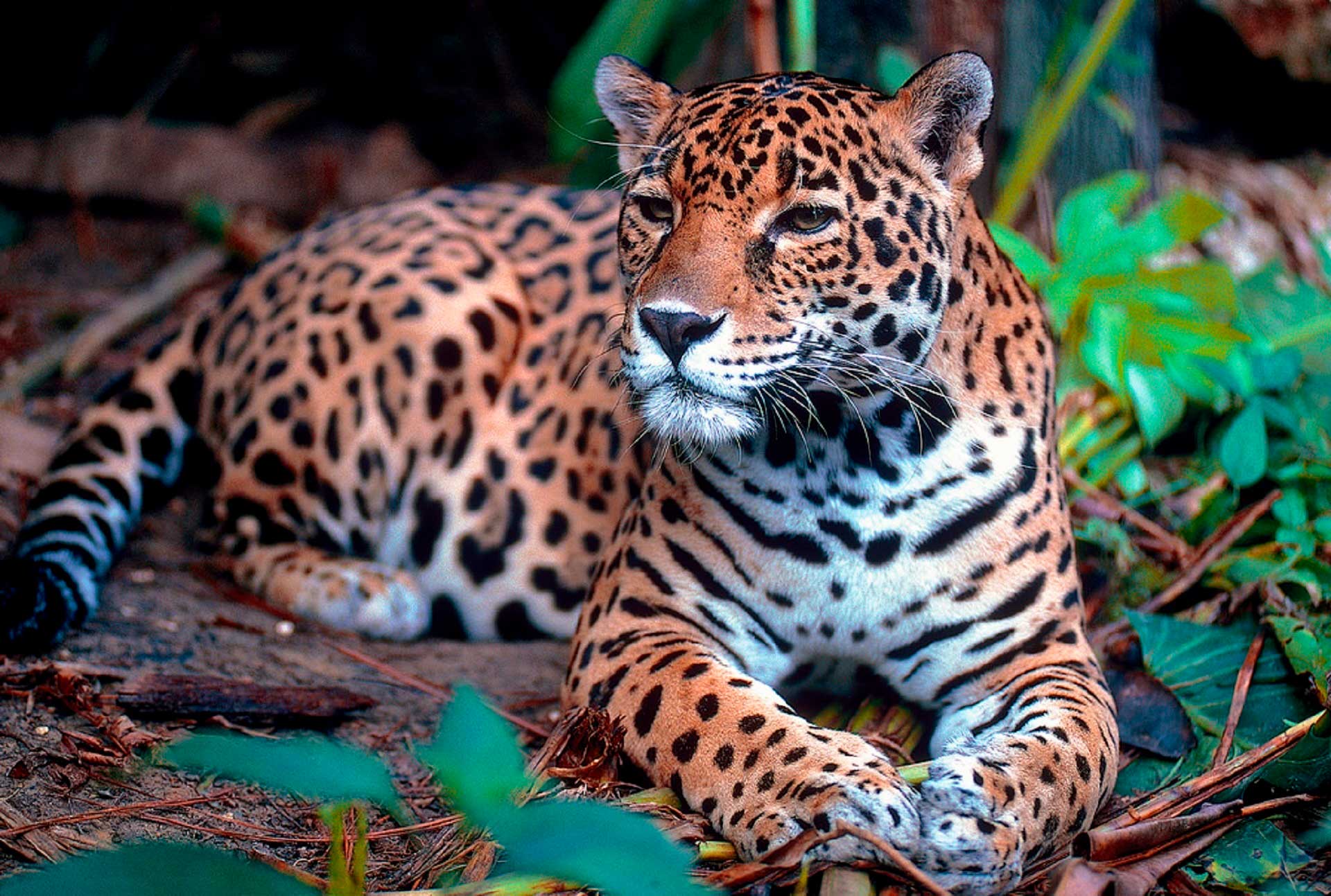 Natural history: The jaguar, although it prefers dense and humid jungles, can accommodate a wide variety of wooded or open terrain. It is closely associated with the presence of water as it is a feline that likes to swim. It is fundamentally solitary, hunting by ambushing, being opportunistic when choosing prey.

It is a key species for the stabilization of the ecosystems in which it inhabits. The Jaguar, or tiger as it is commonly called, is classified as a “threatened species” and its number is in decline.

Threatening factors include habitat loss and fragmentation. This animal is frequently killed by humans, especially in conflicts with ranchers. Females reach sexual maturity approximately between 12 and 24 months of age and males between 24 and 36 months.

It is believed that in the wild they mate throughout the year, although the number of births increases during the rainy season. The female’s heat lasts 6-17 days out of a complete 37-day cycle; females indicate that they are fertile with urinary scent and increased vocalization.

During courtship both sexes cover a larger territory than usual. The gestation period lasts between 93 and 105 days; females usually give birth to 2 young, although the number can range from 1 to 4.

The mother does not tolerate the presence of males after the birth of the young, due to the risk of cannibalism. Their typical longevity (life age) in the wild is estimated to be about 11-12 years; in captivity it can live up to 25 years, having even registered a female that reached 32 years, which places it among the oldest felines.

The adult jaguar is asuperpredator, therefore it is found at the top of the food chain and has no predators in the wild. A Mayan story says that the end of the World will come when jaguars rise from the underworld to devour the Sun and the Moon and perhaps the universe … and an eclipse will be a sample of the final event.