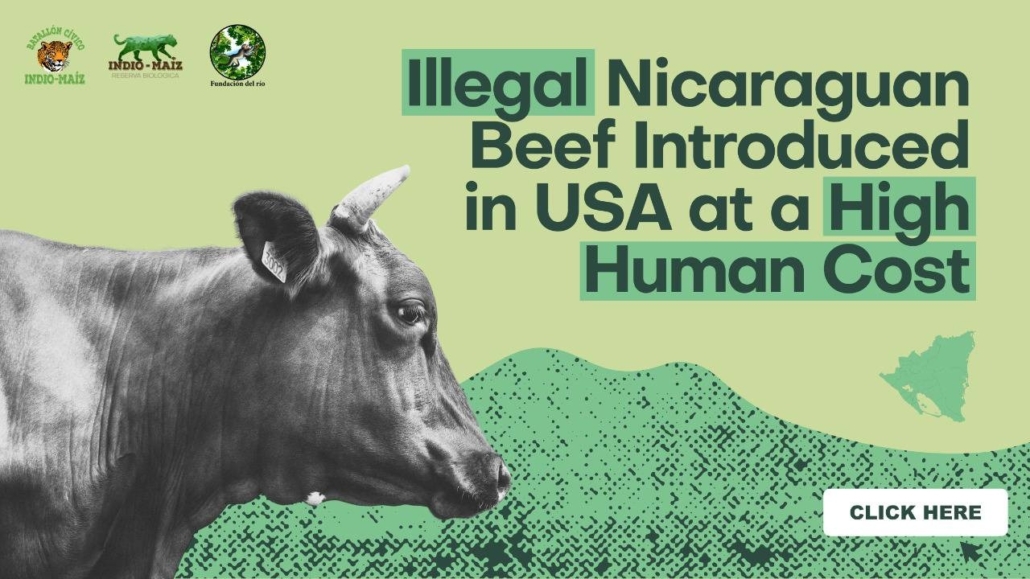 Ilegal nicaraguan beef is being introduced in the USA market to fill in a portion of the gap in local meat production, and most of the time  “American consumers don’t have any inkling as to where their beef comes from today”, expressed Senator Mike Round for an interview with Reveal News.

Why are consumers unaware of the origin of the meat they’re eating? What is happening in Nicaragua that makes this beef be considered as illegal? If you love burgers and grills or even if you don’t eat meat this information interests you.

The outbreaks COVID-19 impacted on meat processing plants in the USA, this situation slowed the production and a quick solution was put on the table: American wholesalers increased their demand for imported beef, and foreign meat suppliers took protagonism.

Nicaraguan cattle ranches did not wait for a call and they happily offered their production at a high human cost. So far, The United States is the biggest customer of Nicaraguan meat, and despite many years of exchanges, USA importers have not shown any interest in making sure the meat complies with the legal standards for distribution. 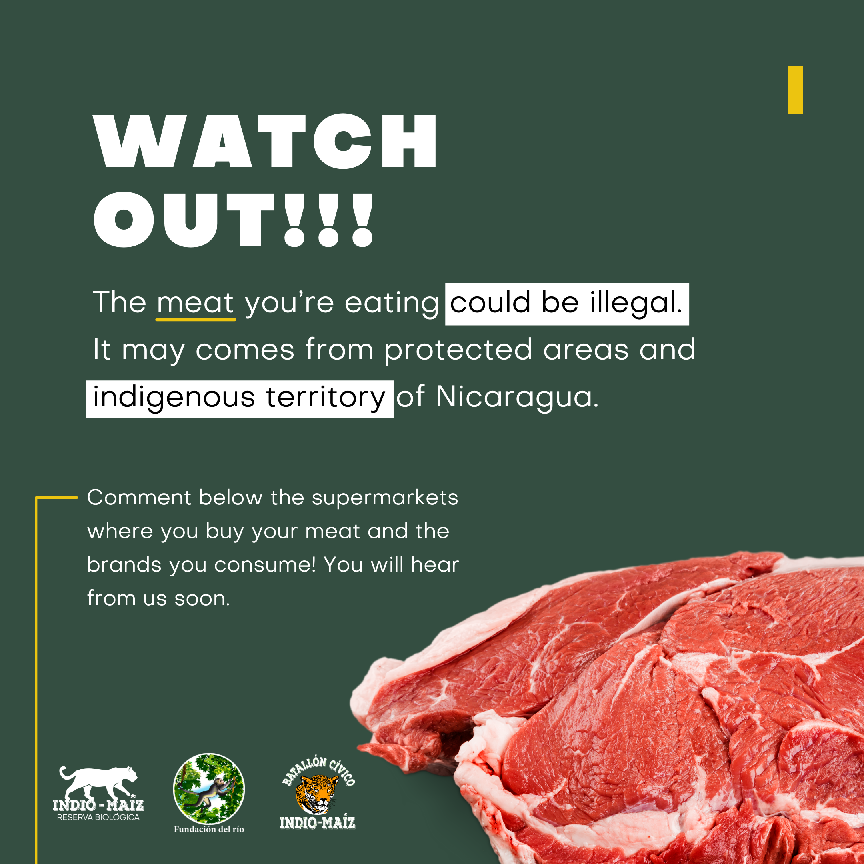 Beef exporters and cattle ranchers from the small country of Nicaragua (which geographical extension is compared to the size of Mississippi) sped up the production during the pandemic, and some of them started to invade indigenous territories and protected areas using force, without skimping on violence to achieve their goal.

According to an investigation by Reveal News, more than 100 indigenous residents have been murdered when they refused to abandon their land, and the ones who left – because there was no other option – lost their ancestral home and heritage. The main purpose of these actions? Occupy the land to make way for cattle ranches.

Once the stolen land is in cattle rancher’s possession, they destroy everything in their path, they set the territory on fire, they take trees down and afflict dozens of natural species.

“Extensive livestock and land grabbing [specifically] in the Indio-Maíz Biological Reserve (the second-largest rainforest in the Americas) and Rama-Kriol indigenous territory creates serious environmental and social problems, such as reduction of forest cover, loss of biodiversity, inequality, social exclusion” and several human rights violation, claimed the report of Nitlapan on 2020, a nicaraguan institute for research and development.

Before the beef shipment lands in the USA, this meat goes through a “whitening” process. With whitening we refer to that moment when the origin of the meat is hidden, and it’s mixed with meat produced in permitted forestlands, so local buyers and importers cannot notice the difference.

This problem begins in Nicaragua, but American wholesalers and big meat companies own responsibility on this matter, because they sell the beef to grocery stores with the promise and guarantee it is grass fed and even “organic or sustainable”, suggesting it is more humane, but this is far from the truth. These actions could be catalogue as “unethical marketing” and they violate many quality standards for environmentally responsible meat production. 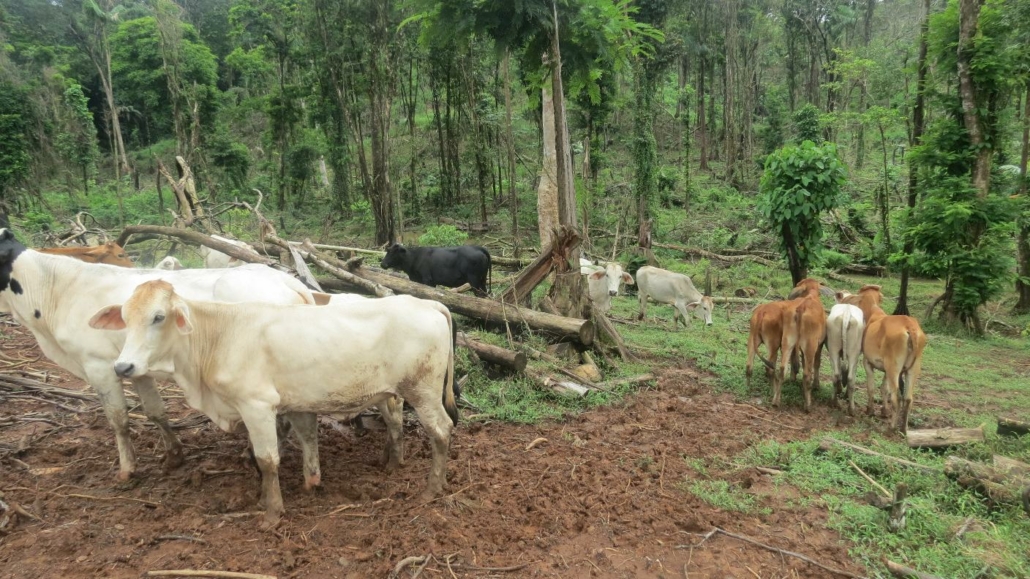 When the beef finally enters the country, if this one is processed and packaged in The United States, meat companies label them as “Produced in USA”, and again the imported beef is mixed with the one produced locally by american cattle ranchers.

In addition, four years ago the USA repealed the laws that regulate the declaration and labelling of the origin of meat to inform the consumer, and nowadays there is no mechanism or entity standing for legal meat distribution.

So beef importers are no longer required to disclose where their meat comes from, and there is no opportunity for the final consumer to confirm the origin of the beef they eat.

In summary, Nicaraguan beef, fed in deforested and stolen land, sustains the USA demand, filling out the menus on restaurants and grocery store shelves at the expense of indigenous lives and destruction of forests and biodiversity. 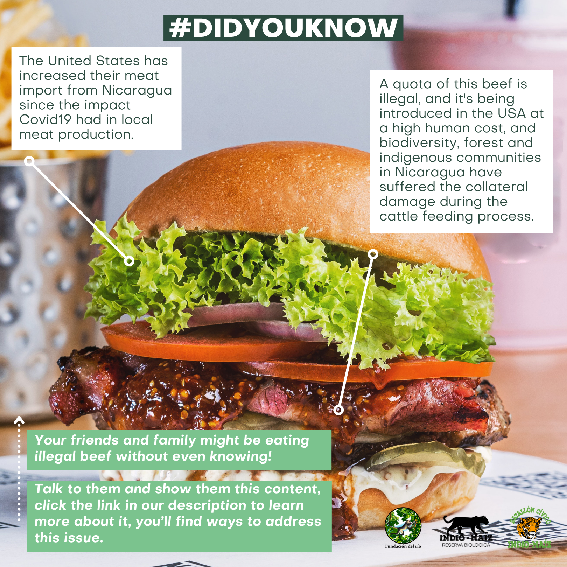 Consumers has the right to know the origin of their food

Senator Mike Rounds started to look into imported beef a couple of years ago, and he proposed the U.S. Beef Integrity Act. In 2020, this bill has not been approved yet, but it was a starting point to make this problem visible to the public eye, because from his point of view, consumers have the right to know the origin of their food, and local production should not be mixed with products that do not meet quality standards.

He has also said during a speech: “It’s pretty simple – only beef born, raised and slaughtered in the United States should receive the ‘Product of USA’ label… As I continue to work with my colleagues on re-establishing mandatory country of origin labeling, we must fix the current labels to protect consumers and producers.

For far too long, South Dakota producers have suffered as their high-quality, American-raised beef has lost value as it’s mixed with foreign beef, raised and processed under different standards. This is wrong. Consumers deserve to know where their beef comes from and accurate, transparent labeling supports American farmers and ranchers”. 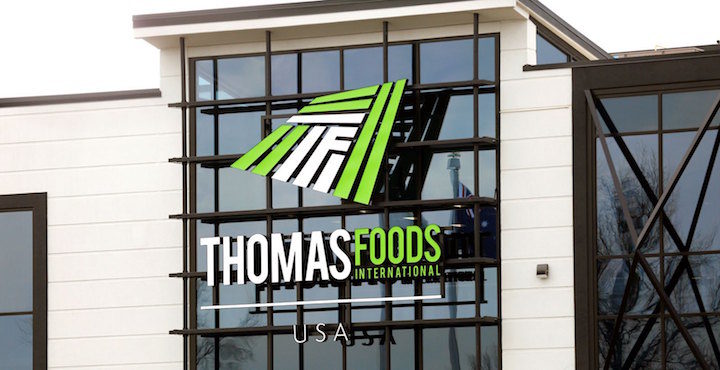 Even though grocery stores cannot confirm the origin of the beef they purchase from wholesalers, they should implement mechanisms to avoid the distribution of illegal products with no social or environmental commitment, especially when they promise their customers a high quality product.

According to the Reveal News investigation, one of the main wholesalers of meat imported from Nicaragua is Thomas Foods, whose records showed that about 12% of its meat comes from the small Central American country.

During their investigation, Reveal News tried to approach the CEO of Thomas Foods, Michael Forrest, but he never called back. However, they had the opportunity to talk with the chief financial officer, John Cassidy, who confirmed their transactions with nicaraguan beef producers and declared that:

“Only a small percentage of the overall product supply guaranteed by Thomas Foods is imported from that country”. Why is Thomas Foods so relevant in this issue? Because it is the wholesaler with proven distribution of Nicaraguan beef to chain stores such as Target, Walmart and Albertsons Cos (recently purchased by Safeway).

This means that there’s a high chance that these supermarkets are the final destination of Nicaraguan meat, where customers buy their beef.

Despite the fact there is no confirmed progress of the U.S. Beef Integrity Act, it is key to share with final customers this information, they have the right to know the origin of their meals to make informed decisions. On the other hand, no one should die for a piece of meat, and the Nicaraguan indigenous community and their biodiversity are suffering the collateral damage of beef production.

If you want to express your disagreement with the distribution of illegal meat, sign this petition today! Click on this link and express your demand for clean, green and ethical products. Help us strengthen your rights as a consumer and fight with us in the defense of human and environmental rights. 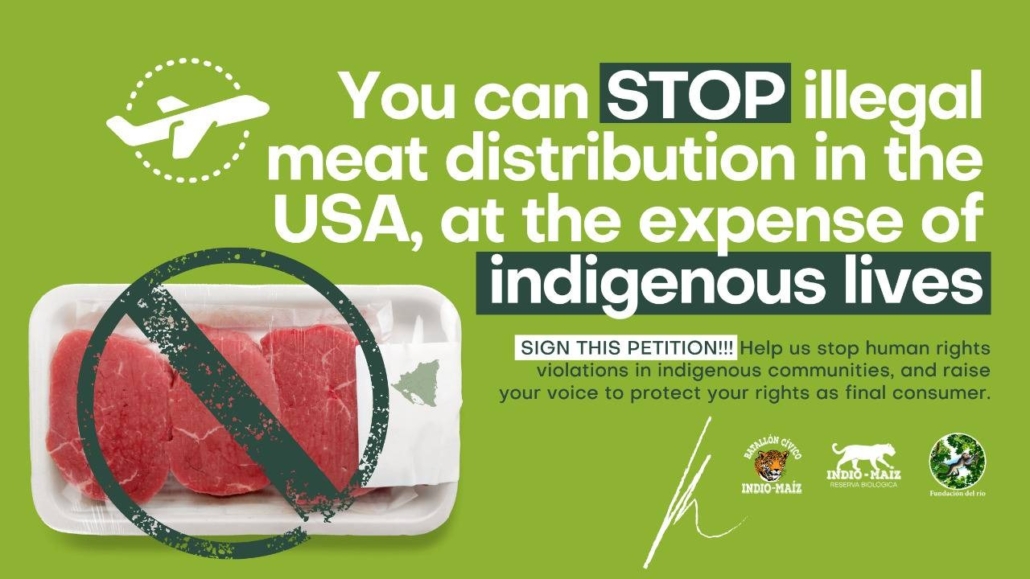 You can also have access to more information clicking the following links: